Award Winners for the year 2003

The ICSI National Award for Excellence in Corporate Governance -2003 function was organized by the Institute at Vigyan Bhawan, New Delhi, on 15th December,2003. The Awards for the Best Governed Companies have been conferred upon-

HDFC has always been committed to the canons of transparency, integrity, accountability and social responsibility. Its core values of fairness, kindness, efficiency and effectiveness are handed down to its subsidiaries and associate companies, thereby weaving to form the corporate culture of HDFC.

HDFC has an independent Board which encourages open and active dialogue with all its shareholders - be it individuals, corporates or foreign investors. The unequivocal focus of Board and management of the company has been to ensure value creation for each of its stakeholders. The financial conglomerate has exhibited exorbitant progress in terms of net income, dividend, EPS and EVA. The company has been given AAA&rdquo; rating by CRISIL and ICRA for its deposits and bonds. It has been adjudged as the best managed Indian Financial Institution by Fox-Pitt Kelton Survey and assigned GVC Level 1 rating by CRISIL.

HDFC consistently strives for building effective relationships with its shareholders. To augument good governance practices, the company has voluntarily adopted several non-mandatory requirements of the listing agreement. The company firmly believes that a strong customer focus and a value driven organization are the means of attaining profits in perpetuity. It has undertaken pioneering efforts for augmenting the knowledge and skills of its frontline staff with a focus on its customers. It has also taken a significant step towards social responsibility by instituting the HDFC School.

HDFC has been consistently demonstrating unique levels of viability of market oriented housing finance in a developing country and has been contributing to the development of Indian micro finance sector by conducting research studies, documenting best practices creation of self-employment opportunities etc.

In recognition of the above mentioned remarkable efforts and achievements, the Institute of Company Secretaries of India is pleased to confer on Housing Development Finance Corporation Ltd., the ICSI National Award for Excellence in Corporate Governance, for the year 2003.

Best Governed Companies (In Private Sector) for the year 2003

Reliance Industries Corporate Governance principles uphold its global standing. The corporate governance practices followed by Reliance Industries are based on recognizing the respective roles and responsibilities of the Board and the Management; having a Board committed to efficiently discharge its responsibilities; independent verification and safeguarding integrity of the companys financial reporting; timely disclosure of all material information concerning the company; highest importance to investor relations; sound system of risk management and internal control; fair review and management effectiveness as well as executive remuneration policy.

In keeping with the belief that corporate responsibility extends beyond the ambit of companys facilities and offices and that corporate citizenship must include common cause with society, the business conglomerate has undertaken several initiatives for the upgradation of education, health care, human capital and community welfare of the country.

Reliance has a defined policy framework for ethical conduct of businesses run by it. It believes that any business conduct can be ethical only when it rests on the nine core values of Honesty, Integrity, Respect, Fairness, Purposefulness, Trust, Responsibility, Citizenship and Courage.

As a consequence of its persistent efforts towards optimum quality, Reliance has earned several accolades including Golden Certificate from Shell Main Products Correlation Scheme, TQM Merit Award and IMC Ramakrishna Bajaj National Quality Award. Safety and Health Management Audits have been conducted at various complexes of Reliance by the British Safety Council which has awarded the highest Five Star rating to them.

In recognition of the aforesaid commendable efforts and achievements, the Institute of Company Secretaries of India is pleased to confer on Reliance Industries Limited, the ICSI National Award for Excellence in Corporate Governance, for the year 2003.

Best Governed Company (In Public Sector) for the year 2003

ONGC has transcended much beyond the basic requirements of Corporate Governance focusing consistently towards value propositions for its stakeholders. It has designed an exhaustive corporate governance management system based on sound principles viz., recognition of the respective roles and responsibilities of the Board and the Management, independent verification of financial reporting, protection of shareholders rights, priority for investor relations and timely disclosures of all material matters concerning the operations and performance of the company.

ONGC has achieved the distinction of being adjudged as the countrys Most Valuable Corporate by leading Business journals and has been placed at the top of all Indian corporates listed in the Forbes 400 global corporates.The company has attained the landmark of earning net profits beyond Rs.10,000 crore, and of making the highest dividend payment (300%) in the Indian corporate history.

As a responsible corporate citizen, ONGC has been making significant contribution towards multifarious Socio-Economic Development Programmes (SEDP) and conducting Social Audit to evaluate the impact of such programmes undertaken.In its commitment towards furtherance of social welfare, the company has provided regular employment to the disabled persons, supported and conducted more than 700 social development and welfare activities nation-wide related to the fields of Education, Health, Calamity Relief etc.The company has instituted a Women Development Fora at all its work centers to focus on the welfare and professional development of women employees.With the intent to promote employee welfare, the company has launched two unique initiatives "Agrani Samman" and "Unnati Prayas".

In its endeavour to achieve ISO certification for all its process units offshore by 2005, the company has undertaken extensive R&D; and formulated unique policy framework.

In recognition of the above remarkable efforts and achievements, the Institute of Company Secretaries of India is pleased to confer on Oil and Natural Gas Corporation Limited, the ICSI National Award for Excellence in Corporate Governance, in the public sector, for the year 2003. 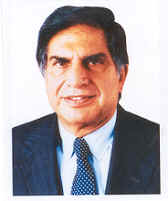 Born on 3rd April 1942, a Business Graduate from Oxford University and an Architect from Cornell University, USA, Mr. Ratan N. Tata is the Chairman of 135 year old Tata Group for the last 12 years.

Under his tutelage, the Groups turnover and profits have jumped five fold resulting in a turnover that is equivalent to 2.4% of Indias GDP. The new look which the Tata Group has attained under the dynamic leadership of Mr. Ratan N. Tata is a healthy mix of service and manufacturing industries and is marching towards becoming a globally competitive value creating conglomerate.

Mr. Ratan N. Tata combined ethical values with business acumen, globalisation with national interests while fulfilling the Tata Groups long standing commitment towards improving the quality of all important dimensions of corporate life of its stakeholders. He himself is a living legend and a role model of the Century with a prodigious combination of an architect, an entrepreneur and an idealist.

Mr. Ratan Tata has also demonstrated his national concern in many ways. He is a member of the Central Board of the Reserve Bank of India and the Prime Ministers Council on Trade and Industry. Last but not the least, Mr. Ratan Tata has excelled in the area of corporate social responsibility and is the Chairman of the largest private sector promoted philanthropic undertakings in India i.e. Sir, Dorabji Tata Trust and Sir Ratan Tata Trust.

In recognition of the above remarkable achievements of Mr. Ratan Naval Tata, the Institute of Company Secretaries of India is pleased to confer on him The ICSI Life Time Achievement Award for Translating Excellence in Corporate Governance into Reality, in the year 2003.With accent on youth, Mr. Ratan N. Tata devised the first ever retirement policy for senior managers in the Group that paved the way for the infusion of younger blood and fresh thinking in the organization uncluttered by past baggage. In line with the retirement policy, Mr. Ratan N. Tata himself relinquished the Executive Chairmanship of Tata Sons on turning 65 and became its non-executive Chairman. One of most treasured achievement of Mr. Ratan N. Tata is his spearheading of the Tata Motors successful entry into passenger cars in 1999 with Indica, the first car designed and developed by an Indian company.